I Still Don't Know Who I Am 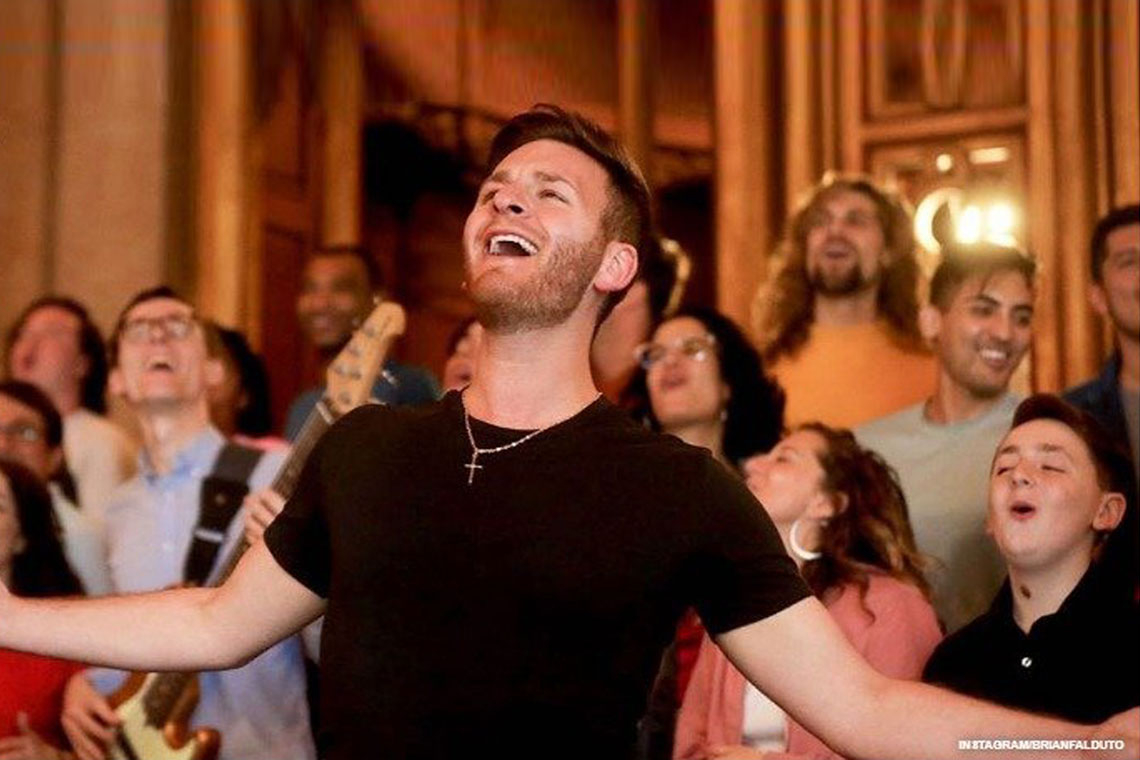 Our very own Brian Falduto had an article go live in the Advocate and would like to share it with us all. Way to go, Brian!  If you prefer to read the article online, complete with photos, then go here:

“The self is a vast continent whose exploration we can never complete.” - Unknown

Nearly three years ago, and about 14 years after I became the reluctant recipient of the title “that gay kid from School of Rock,” I decided to do a figurative coin flip on the way I was approaching my life. It was a gamble, but I knew I could either stick with the side of the coin I was already familiar (and unhappy) with: running away from my own self and hiding behind exhausting expectations, destructive relationships, and menial social approval. Or I could find out what’s on the other side.

So, for the first time, I paused and thought to myself, “What if I embraced who I am?”

A lot of people assume that when you come out of the closet, that’s the moment when you embrace who you are. As someone who’s been out of the closet for a little over six years now, I can assure you that I was still very far from knowing who I was when I first collapsed to my knees in front of my best friend in her college dorm room and confessed that I loved a boy.

Six years is honestly not a long time. And technically it’s only five since I spent my first year out of the closet professing that I was bi; my anxiety clinging to a chance to turn back in case things went south. But within the six years since I’ve openly admitted to being a member of the LGBTQ+ community, you can find a few instances where I’ve resurfaced. I’ve released some music and have been promoting and performing that as able. But I’ve also been fortunate enough to share some of my story through interviews and speaking opportunities since deciding to become a life coach — my first time doing so being for The Advocate in March 2018.

Armed with the catchphrase, “Love yourself, share your story,” I’ve tried my best to do just that. I’ve opened myself up to talk vulnerably about the traumatic experiences I had during and after my child actor days and the internalized homophobia that resulted. Even though I denied them the chance to do so for 16 years, supporters who resonated with my work on screen at such a young age have wasted no time in reaching out and telling me what it meant to see someone like me on the big screen in 2003; in most cases, someone like them. I’ll admit, the beautiful moments of connection that have come since embracing and sharing my story have made me feel silly for hiding. But I was 11 and it was a different time, and I had to do what I had to do to survive.

Something I find amusing as an active coach, and I’ve mentioned this before, is that people seem to love hearing about the days that I was bullied because they connect to it. And then they love hearing that I’ve risen above it all and that I am now a confident gay man. It’s a great added storytelling element that I am more or less using my journey to help others in the community, but as I and many of my clients will tell you, loving yourself is a full time job. Everyone seems to want to work at Love Yourself Inc., but not everyone wants to put in the work needed to be employed there.

I’ve created a cute little Instagram account, @thegaylifecoach, and I’ve launched an identically-named podcast, “The Gay Life Coach Podcast.” On both of those platforms, you’ll find me stressing about how I believe that healing is necessary for the queer community. I agree with comedian Hannah Gadsby when she says, “We don’t get to just flip a switch” on the years of hating ourselves. And with author Matthew Todd when he says, “The language of mindfulness and mental health need to be as much a part of queer culture as Beyonce, Madonna, and Lady Gaga.”

In our efforts to jump to the conclusion of our story as proud gay men, we want to skip over the chapters that require us to reckon with and connect to the self we’ve been disassociated from our whole lives — and it just doesn’t work that way, unfortunately. I do get it though; it makes sense to me that, as a minority group, we would feel self-conscious about wearing any faults we have on our glitter-doused tank tops as we then risk giving those trying to oppress us more ammunition to do so.

Before I came out, I had a really clear picture of who I was in relation to my surroundings. Whether it was a room full of straight men, a family gathering, a college night of drinking with friends, or whatever the scenario may be, I knew my role. I knew what to say and what to do and essentially how to make it through to the other side of that social situation unscathed. Perhaps if you spent a long time closeted like me, you can relate to this way your brain adapts to protect you from perceived threats and a lack of safety. In psychology, they would likely refer to this as habitual patterns of behavior developed by your inner child.

A quick detour to talk a little bit about the brain.

During caveman times, the brain (and subsequently the body) developed a fight-or-flight response that was essential for survival. Basically, if a human saw a lion, the human’s glands would release hormones such as adrenaline and cortisol which communicated internally that it was time to freak the F out and get out of there. Fortunately or unfortunately, that way of responding to threats has remained integrated in human biology. Yet in most of our lives, the threats are no longer things like lions. Instead, we are dealing with a multitude of less severe stressors such as financial burdens, mother-in-laws, and decisions like whether or not to go to the wedding your friend hasn’t cancelled in the middle of a pandemic.

When I finally became so overwhelmed with attraction to a guy that I could no longer bear keeping it inside, I found myself entering several new scenarios in which I did not know my role. Even old scenarios like family gatherings and drinking with friends were now new to me because I couldn’t rely on the same methods I had always used to get through them unscathed. Instead, I was suddenly face-to-face with all of the threats that my inner child had spent my whole life protecting me from — and very vulnerably so, since I was also dealing with my own perceived failure at maintaining the role I had taught myself I belonged in.

The idea that I could come out after 14 years of being closeted and suddenly know who I was while copious amounts of adrenaline and cortisol were shooting through my body in an effort to help me survive is funny to me now. But just like before I came out, my brain did it’s best to make sense of things and quickly assembled a new identity.

All jacked up on lion-attack-level hormones, I began my life as a gay man in the world.

But then my behavior as such only dug me deeper into shame. I was chasing after things and experiences I couldn’t and shouldn’t have because, well, I was out now, so I could do whatever I want, right? I could finally be who I’ve always wanted to be (perfect and successful) and have what I’ve always wanted to have (unavailable men), and as long as my friends and I were able to drink and dance and laugh and afford rent in New York City (because that means you must be doing something right), then everything was fine! Right?! Sadly, this is not the case. As many lonely nights soaked in my own tears would teach me, I was wrong.

To make a long story short(er), the teary nights got to be too much for me. I count myself lucky that “rock bottom” came so early and so frequently in my first years out of the closet. Maybe it’s because of the uniquely scarring experience that put me in the closet in the first place, but when I got out, I went big. And a few years later, I went home — I went home to work on myself.

Who am I? That’s what the past couple of years have been about. Every day, it feels like I uncover some new little breadcrumb that my inner child left behind in case I ever went looking for him again. But being the protective little bugger he was, there are quite a few hurdles and roadblocks that I’ve had to get through in my efforts to reconnect with him. My Type A personality has been eager for an ETA on when I’ll get to the end of the trail. “WAZE?”

It is with great joy and clarity that I report back to you that there actually is no end of the trail. There is no arrival point in the discovery of self.

You can imagine my initial disappointment as someone who, quite a few times now, has been pretty sure about who they were and was determined to get back to that place of safety. It’s certainly what my fight-or-flight brain wanted. Certainty is comfortable.

I put blinders on at such a young age and my work as of late has been to uncover the blind spots of who I am. I’ve also been encouraging others to come along and do this work with me because I believe there is healing to be done. I still believe that but perhaps the word healing needs to be clarified because in a way, it implies a return to some sense of normalcy — that sense of safety we’d become used to.

But true healing questions who we are. Because beyond any thought about who we are, there is an unlimited potential. If that’s too spiritual for you, science has proven that we are made of the same stuff as stars. Stars! So you can put up as many protective parameters around yourself as you’d like, but it won’t ever change your ability to shine. (Yep, like stars.) And healing should be about enhancing the specific and unique way you shine, not covering it up with something so trivial as figuring out exactly who you are right this minute. Often, we try to package up who we are and wrap it with a bow. But if we tie the bow too tight, we don’t leave enough room for all that’s actually there. It is not always easy, and it definitely gets uncomfortable, but that is where I find myself in my inner work these days. The question is no longer, “Who am I?” It’s, “How much can I let go of who I am?”

I wanted to paint this inner work in this new light because I believe that we all deserve to shine as brightly as we possibly can. I’ll tell you this much — it’s a way more dazzling glow than any glitter-doused tank top.

I still don’t know who I am, and for the first time ever, I don’t care. Any knowing of who I am would prevent me from realizing what I can be.

You can check out more about Brian Falduto at his website (brianfalduto.com) and listen to his latest single here:   https://open.spotify.com/album/2k7DFZ6BsBEMsLdSpKTtDT?highlight=spotify:track:2BqbHV5HVaW92DE0zQJpmw